I’m living with a biologist named Meredith*. She recently moved in, as always when one acquires a roommate there is a bit of apprehension. Will we have interests in common? What if they have weird habits? Happily, I’ve discovered there are multiple benefits to this arrangement; she shows me the skulls of various animals that she’s found during her research over coffee and I react with interest.Then  Meredith, in turn doesn’t bat an eye when I trench the backyard in the name of diverting our waste. In fact, her greatest worry, when I dug up the side of the yard to bury the week’s compost, was that I might be able to see her while she prepared to shower. Given how high up the bathroom window is, and how short I am, it would have been physically impossible, at any rate I was more interested in the earthworms that I was digging up.

Apparently Meredith’s fear of unintended flashing is limited to me. When I returned home from my evening class last week, I heard a cry of “Just a heads up, I’m half naked”. The comment registered with me, as I sat down to untie my shoes, but it didn’t sink in until I entered the kitchen and found Meredith standing in a nude coloured tank top and her underpants. “You’re half naked” I said, stating the obvious. “I did warn you” my roommate shrugged as she packed up the last of her dinner.

“I got tired of standing in the bathroom waiting for the tub to fill. So I came out here to clean up my dishes.” She added by way of explanation. The bathtub in my house was the inspiration for the poem “Rub-a-dub-dub three men in the tub”, it takes no less than forty minutes to fill up, if I was a little smaller, I might describe it as a swimming pool. 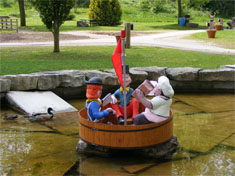 For all those who recognize this image, yes, I went there. (Photo Credit: storybook.london.ca)

Meredith continued to talk away while washing pots and pans in the sink. I interrupted her. “Do you mind if I close the blinds?” The alleyway is becoming a fire hazard what with all the frat boys pressing themselves against the window to watch you. “Oh. Ha!” Meredith laughed turning towards the open window. “I didn’t notice that.”

As I lowered the blinds, impeding the view of my buxom, young roommate in her skivvies, the frat boys let out a collective groan. I had to smile; no matter if the dirty dishes pile up in the sink, at the very least, Meredith and I have a penchant for accidental indecent exposure in common.

*Names have been changed to protect the identities of persons who count lifting one and a half times their body weight as a hobby. It seems prudent not to annoy people who can quite literally strong arm you into submission by publishing their name on the interwebs.

4 thoughts on “Naked In Public: The Roommate Edition”