Once upon a time, when I thought BonneBell lip gloss was king, my mother took me to see strippers. Before anyone gets too upset, I should add it was for charity. Also she took my younger sister and a friend of hers too. As well, I should clarify that she didn’t actually make it rain Benjamins. We’re Canadian so any precipitation would have been Loonies, if one wanted to invoke the name of our one dollar coin, but that seems vaguely derogatory and I’m under the impression that it’s more hip to cite the name of the person on the bill in which case my mother made it rain “Elizabeth the Seconds” or “E2” as we like to call her up here in the puzzling, frigid north.

Anyway, if hauling your two teens and one of their friends out for a summer evening to watch men take off their clothing wasn’t enough, my mother secured us front row seats to the action.

So much better up close. How else could my young mind have appreciated the gyrating hip action? (Photo Credit: joesbananahammock.com)

Because banana hammocks are always better close up? Because if you’re going to land your kids in therapy it’s better to go big or go home? Because she was being considerate of my myopia?

Regardless, this was how my sister and I found ourselves watching a man impersonate Tarzan while single women in the crowd went wild and my mother hooted and hollered. It was marvelous fun, although it left me wondering whether our go to family restaurant would now be “Hooters” in support of equality for my Dad. Or if we would voyage to nude beaches in the summer to awkwardly walk around as a sun burned family.

Happily none of those other events came to pass, but I will always remember my mother whistling enthusiastically as a man impersonating “Usher” arrived on an open top jeep into the show. That’s a cherished childhood memory if I’ve ever heard of one. I shall repeat it for all of her friends when she gets old and takes up lawn bowling and knitting sweaters for cats.

When I’m out and about, my nudity is unintentional. However at home is another story; when I lived on the second story of the doctor’s house, Roscoe would begin by pleading that I “not stand in the buff next to the window”. When he realized that this wasn’t making a difference, he changed to “please close the curtains when you stand naked next to the windows” which eventually became “could you stop standing naked next to the windows which face out onto a busy street?” 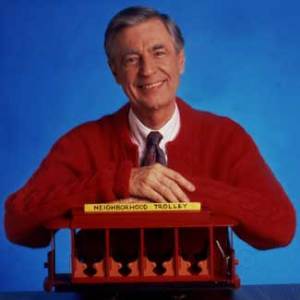 For the record I’m not an exhibitionist, only extremely absent minded which is why I constantly forget that I live in a bungalow and that my kitchen window faces the entrance to the neighbouring frat house. (For the record –yes I do choose my living accommodations based on proximity to entertainment.)

Last Saturday, having climbed out of the shower, I headed towards my bedroom in a towel. This was when I realized I’d forgotten my bra in the bathroom. Throwing off my towel, I walked into the kitchen in my birthday suit. It was at that moment that the frat boys decided to all head outside together, no less than twenty of them poured into the alleyway between the houses. There were so many young men that some of them were pressed up against the side of my house right next to my kitchen window. “Eeek” I shouted jumping backwards back into my bedroom, having just flashed approximately fifteen young men the goods.

The scene looked exactly like this. Only there were about twenty Dustin Hoffmans. Also there was shrieking. And no one got any action afterwards, unless of course you count my kitchen blinds which were lowered for the first time since I moved in. (Photo Credit: sf.funcheap.com)

The students got their revenge though, the next morning as I was making my lunch, I watched a fellow look around, turn his back to my kitchen window and proceed to pee in the alley. Laughing as I pushed the pane upwards to open the window, I yelled “Just a heads up, that spot is less private than you’d think.”. Glancing over his shoulder the youth shot me a sheepish smile. “Good to know” he replied, zipping up his pants.

Surprise of all surprises I did not die. Although my muscles are still so tight that my toe touch in yoga has become a “reach just past your hips” touch. I’ve also developed the ungainly habit of rubbing my inner thighs in public. This wouldn’t be so bad if I didn’t pair it with groaning “Oh God that’s good” while I massage my sore legs.

After hearing about all the fun I had cross country skiing with Natalie*, my friend Sula* decided she wanted to try the sport. Even after I showed her my almost death note, she kept insisting that it sounded like a good time. Seeing as Sula thinks that weekends spent in shacks without running water and indoor plumbing are a “getaway”,  it was unlikely I could convince her otherwise.

Away we went at eight thirty in the morning. Sula insists on arriving a minimum of thirty minutes early to any destination, so we pulled into the park before it opened. Rather than waiting thirty minutes for the rental shop staff to appear, we decided to embark on a five kilometer hike through the snow to add to our day of excessive physical activity.

When we returned, the chalet had opened, so we suited ourselves up and away we went.  Once again I did two trails. And once again it was exhausting and long. At one point the trail seemed so endless that I laid down in the snow and waited to freeze to death. Unfortunately this proved to be a slow way to go, even slower than my speed of skiing, so I sat up and continued on. At last Sula’s truck came into view and the torture was over.

With all three of my layers sopping wet and squishing with every step, I made my way toward the rental hut. Having marinated in my own juices on the car ride home with Natalie last time, I came prepared with dry clothes to change into for the ride back. What I had not bargained on was how tired I would feel and my lack of desire to walk the two hundred feet to the change room after skiing.

Out of the corner of her eye, while unlacing her boots Sula thought “I think Unwashed is changing in the middle of the rental shop”. A flash of my fleshy, pasty midriff confirmed this a moment later. Luckily I had just pulled on my clean, dry-fit shirt when a bus full of tourists burst into the shop.

The point of this post was to say I am fine, I am still probably coated in sweat and other disgusting things and I have kept up my habit of giving unsolicited shows of nudity. Essentially all is well in the Unwashed world.

*Names have been changed to protect the identities of those who chose not to throw society’s shackles to the wind and eat me alive on the cross country ski trail for energy giving sustenance.

It’s the first day of the work week. This can mean only one thing; time for more of my bad photography!

In the album the caption below this picture says “A bird!”

I have yet to find said creature. It’s my guess that I stumbled haphazardly into the woods and pointed my camera at the ground thinking that ten to one there had to be some sort of wildlife there.

At least I didn’t label it “Iguana!” That would really be a head scratcher because this was taken in Algonquin Park.

I began the day by sorting through all of the pictures I’ve ever taken so that my readers will know my starting point. In the process I managed to find some paperwork that I had cleverly hidden in a place I would never think to look, nowhere near where I store important documents.

It’s almost Tuesday so I’ve decided to make this a two-for-one post and throw in some Travesty Tuesday correspondence. The following is the actual email I sent to my mortgage broker, who is thankfully also my Aunt so she had at least some idea of how difficult it would be to work with me.

Guess what I found while looking for pictures to put up for “Indistinguishable Mondays”?

My Notice of Assessment. Score one for completely inefficient and disorganized filing systems.
Yay.
I will send it on later today when I’m not sorting through photos going “Whose naked back is that?’
and “Why do I have so many photos of naked backs?”
I am a very responsible adult. You should probably send your daughter to visit me during her February break, I shall teach her important grown up things like how to take months to file paperwork.
Much love and apparently many skin photos,
The Great Unwashed
In a show of poise and unshakable professionalism Aunty Camelia* sent me back a sincere and concise thank you.
*Names have been changed to protect the identities of those people who are helpful and patient, even if said person did once try and feed me puffed bulgur.