I didn’t think he would beat me to a pulp but I couldn’t be sure. I was on a flight from my new small town to a big city to meet Sula for a conference that she was attending. Sitting in between me and the bathroom was a man the size of a house.

As this was two years ago, I was neither pregnant nor traveling with a baby, thus, I was wearing my standard twelve year old girl disguise. My short stature and high voice confuse people. When combined with rainbow kneesocks and a penchant for ridiculous actions, I end up being mistaken for a grade schooler on occasion.

At that moment,  my thirty going on thirteen year old self was debating the pros and cons of climbing delicately over the arm rests and pretzeling myself into the small space between the giant man and the roof of the aircraft, in order to get to the washroom. On the one hand I had to pee BAD. Next to the other hand was one of the most muscly and enormous people I had ever clapped my eyes on outside of a circus act featuring strong men.

“What’s the worst that could happen? ” I asked myself, pulling up my knees into a crouching position,  preparing to move spider-like over the seats and the huge human obstacle next to me. I had decided that it was best to exit facing the man, that way if he woke up instead of staring at my large and speechless bum, he’d see my sheepish smiling face. At worst, he would stand up, unintentionally tossing me over his shoulder like a the year old in a tantrum. Luckily,. just as I was making my move, it was at that moment that Jon Mirasty woke up.

To be clear,  I didn’t know he was Jon Mirasty. If I had,  I never would have considered climbing over him. It wasn’t until after I politely asked him to move and returned from using the washroom that he introduced himself. Even then,  he only said his name was Jon and that he raised horses a ways outside the town I lived. Only when I asked him why he was traveling did he reveal his celebrity status. “I’m heading to see a surgeon. I messed up my shoulder playing hockey” he said. “Oh?” I said “Do you play hockey often? ” Simply, Jon Mirasty replied “Well I was in the NHL.”

I can talk about a lot of things; the importance of hiding candy so you discover it later like some sort of human Easter bunny, the proper way to shellac your own bum and of course the best strategy for accidentally flashing church elders. Tragically hockey isn’t one of those topics, so I brought out the only factoid relevant to the conversation that I knew, “Jordin Tootoo is also a hockey player.” Awkwardness for the win. 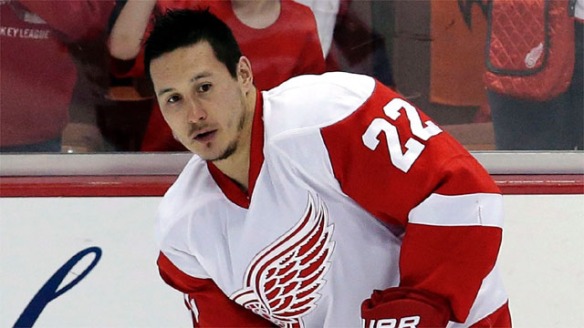 Luckily Jon Mirasty skated over my odd statement to continue the conversation. “Yeah, I know Jordin” he said. “I’m sorry” I confessed,  “that is the sum total of my hockey knowledge and I only know it because Jordin is First Nations and I work with some indigenous people.” Jon Mirasty quickly corrected me “Jordin’s Inuit.” “I’m Cree.” He added pointedly to differentiate.

We then went on to have a pleasant conversation for the rest of the flight. Always a writer and therefore curious about other people’s lives and experiences, I peppered Jon Mirasty with questions which he happily answered. When I asked Jon Mirasty whether he missed playing in the big leagues, the former NHL player surprised me by saying that he didn’t because it meant a lot of travel and being away from his family.

With that response rattling around in my head, I was stunned to discover after Googling Jon Mirasty, that like Jordin Tootoo, he was an enforcer. A position dedicated to beating up and laying hits on the other team’s players. In hockey circles Jon Mirasty was called “Nasty” because of his habit of laughing while beating his opponents senseless. 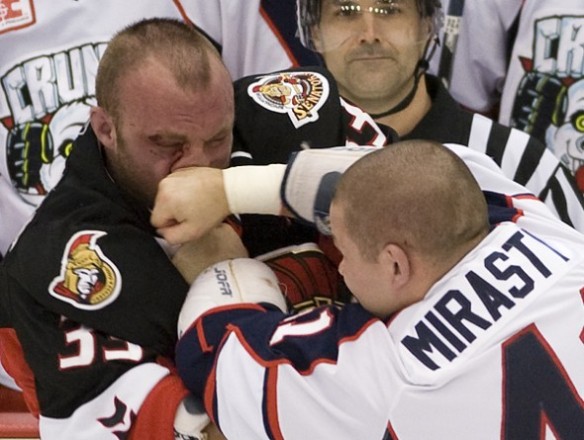 Given this unique reputation, I was somewhat relieved that he woke up before I took the opportunity to climb over him. I’ll think twice before deciding to leap frog over men the size of Volkswagens the next time.