Wait. That came out wrong. The title was supposed to be like the joke in “Uncle Buck” when Macaulay Culkin walks into the kitchen and sees this.

Then John Candy adds “You should see the toast I couldn’t even fit it through the door.” The viewers never actually see the toast, much like my underpants. The title meant to imply that my underpants are really colourful. Tragically I forgot about the first part of that joke, which was the giant pancake, hence I should have started with a photo of my ridiculous ensemble for today. A better writer might have changed the title, however here at The Great Unwashed, we aspire to calamity not perfection, so the title stays despite the fact that it comes off as “Hey internet, are you feeling hot because I am. Maybe you should drop by my place for some tequila.” which is a lot to communicate in such a short, awkwardly written title, but there it is.

One of the benefits of going back to school, is that I’m able to express my true self with my clothing. In classes, there is no one to ask you not to come to work tomorrow because you insist on dressing like a colour blind rodeo clown. There are only confused eighteen year olds with camera phones, but I’ve always loved having my picture taken. And I can only imagine the lovely statements they’ll make about my fashion choices when they put the images online. Thus, with further adieu here is my outfit of the day. 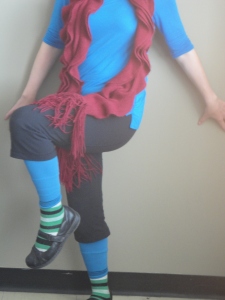 Yes those ARE tights underneath pants. I tend towards Mormon modesty chic.

I know what you’re thinking. It’s glorious, and you didn’t even see it with my green and white monster mitts. And once again we’re not even going to mention hues of my undergarments are.

I’m writing this from exile. Roscoe told me not to come home until I am nice. Yesterday I traveled for sixteen hours. Ten of those hours were spent on a plane. My family’s nickname for me is “Bitey Scratchy” because I’ve been known to behave like a feral cat when I’m jet lagged.

To those of you who have never had the joy of taking in a wild animal, feral cats are nice sometimes, specifically when you are giving them things that they want like food, the rest of the time their hobbies consist of leaving puncture wounds in exposed skin and hissing.

For the most part Oliver* is a good cat now. She only bites when she’s annoyed which is often but she lets out a low warning growl beforehand. And really she doesn’t bite very hard. Not that it matters, after the first couple of times the whole family got rabies shots.

Anyway, following spending an entire day in transit I behave like Oliver. To add insult to teeth imprinted injury, jet lag also seems to affect my thought patterns. I’ve spent the past two days wandering about pretending to be Andre Leon Talley**.

This is unnerving for two reasons. The first is that no matter how convincingly I stagger around screeching “There’s a FAMINE of beauty. A famine!” or talk about wearing my hand made underpants in Karl Lagerfeld’s vacation house, in no way do I resemble the 6’7 two hundred and fifty pound fashionista.

Try as I might no one has ever mistaken me for this man.  (Photo credit: Museum at FIT)

The second is that my parents have never heard of Andre Leon Talley so they become just a little more concerned with each successive impression. I overheard them talking about Bellevue in the living room and I don’t think they were discussing Diana’s old apartment in Kensington Village. Roscoe who has seen this behaviour in action told me that I’m to stay with my parents until I am normal(ish) again.

So effectively I’ve been exiled. It sounds worse than it really is ; they feed me well here although I do find my parent’s habit of wearing dog catcher’s body padding unnerving.

*Oliver is a girl cat. We like to do that here, give our girl pets boy’s names. There’s just not enough confusion in this world and one should always keep one’s vet on their toes. It’s not enough to simply throw your newly acquired feral cat into the room with an animal care professional and close the door, it’s really best to complicate things by saying “Oh our cat George had kittens last week.”

** Andre Leon Talley is one of the contributing editors to Vogue magazine. I adore watching and listening to him, the only thing larger than his body is his personality. He once filled an entire ballroom with one joke. When I grow up I am going to be Mr. Leon Talley. Or maybe not, because that might make Roscoe Anna Wintour, or would it make him Grace Coddington? Regardless, I don’t think Roscoe would like either of those options.

Once upon a time, when my butt was about three inches higher and I loved Hanson more than anything on earth, I worked at a Hasty Market. For those of you who aren’t Ontarians, a Hasty Market is a convenience store with a small deli section. Anyway so there I was, all of sixteen and charged with the responsibility of selling cigarettes. It was a job I took very seriously. Once I got past the irony of the fact that I was responsible for deciding who could buy cigarettes when I myself wasn’t old enough to purchase them. While some teens would run amuck with this newfound smoky power, distributing cigarettes left, right and centre, I made a point of carding most people. Often, people got annoyed, and sometimes people said thank you. But I knew I had truly made a mistake when the person let out a joyous whoop and then made a happy show of handing over their I.D. In my defense what kind of forty year old wears coveralls and a bikini grocery shopping?

I digress. So two weekends ago the same sort of thing happened to me. Ish. I haven’t decided whether to be offended or very proud of my youthful looks. I’ll just tell the story and let you decide.

There I am, Saturday night walking into the swanky restaurant in the hotel where Carter* and his family are staying. Now I had spent the entire day playing with Carter. First we played a little in the hotel, then we went to an indoor fair, when he got hungry I took him to Tim Horton’s where I realized that I had to stop saying nonsense to him because now he actually acted on it. Finally after his nap, just before dinner we went in the pool together and I attempted to give him a swimming lesson. As we had spent the past two days running around nonstop this wasn’t happening.

So after all that I manage to get him dried off and changed into nice clothes for dinner. However as I was dressed for Carter’s enjoyment rather than for the fishing club’s that was also meeting at the restaurant, I may not have been appropriately attired. Nonetheless I put my lime green, monster t-shirt back on which clashed nicely with my rainbow socks and white sneakers. I did wear pants for the record but they weren’t terribly interesting.

Along with forgetting suitable dinner attire, I also forgot a brush, but seeing as my hair is curly no matter what happens to it, I didn’t worry too much about this fact. It just meant that my hair was a gnarled looking sort of curly rather than just curly.

Anyway back to the story, so into the upscale restaurant we march; my mother, Carter’s mother and Carter looking dapper and trendy, then me tailing behind in my fluorescent green, monster t-shirt with wet, gnarly hair.

So we order dinner and the little guy sits for the majority of the meal except for when the gigantic, floating fish/shark/Hindenburg thing bobs over to our table courtesy of the fishing club. But then Carter finishes his dinner and wants to go play. Seeing as my dinner companions don’t frequently run off in search of gigantic, floating fish/shark/Hindenburgs, I run after him so his Mom could eat.

So there the two of us are, crashing this fishing club’s belated Christmas party and trying to swat the floating fish/shark/Hindenburg out of the air. After a while I manage to convince Carter to come back to the table with me. This was when I was told that while we were gone the waiter had come over and politely inquired “Whether the children were finished?” and taken our plates.

I’m not sure whether this is a compliment or a damning statement about my wardrobe and life choices.

*Names have been changed to protect the identities of the fish/shark/Hindenburg fearing innocent.