Surprise of all surprises I did not die. Although my muscles are still so tight that my toe touch in yoga has become a “reach just past your hips” touch. I’ve also developed the ungainly habit of rubbing my inner thighs in public. This wouldn’t be so bad if I didn’t pair it with groaning “Oh God that’s good” while I massage my sore legs.

After hearing about all the fun I had cross country skiing with Natalie*, my friend Sula* decided she wanted to try the sport. Even after I showed her my almost death note, she kept insisting that it sounded like a good time. Seeing as Sula thinks that weekends spent in shacks without running water and indoor plumbing are a “getaway”,  it was unlikely I could convince her otherwise.

Away we went at eight thirty in the morning. Sula insists on arriving a minimum of thirty minutes early to any destination, so we pulled into the park before it opened. Rather than waiting thirty minutes for the rental shop staff to appear, we decided to embark on a five kilometer hike through the snow to add to our day of excessive physical activity.

When we returned, the chalet had opened, so we suited ourselves up and away we went.  Once again I did two trails. And once again it was exhausting and long. At one point the trail seemed so endless that I laid down in the snow and waited to freeze to death. Unfortunately this proved to be a slow way to go, even slower than my speed of skiing, so I sat up and continued on. At last Sula’s truck came into view and the torture was over.

With all three of my layers sopping wet and squishing with every step, I made my way toward the rental hut. Having marinated in my own juices on the car ride home with Natalie last time, I came prepared with dry clothes to change into for the ride back. What I had not bargained on was how tired I would feel and my lack of desire to walk the two hundred feet to the change room after skiing.

Out of the corner of her eye, while unlacing her boots Sula thought “I think Unwashed is changing in the middle of the rental shop”. A flash of my fleshy, pasty midriff confirmed this a moment later. Luckily I had just pulled on my clean, dry-fit shirt when a bus full of tourists burst into the shop.

The point of this post was to say I am fine, I am still probably coated in sweat and other disgusting things and I have kept up my habit of giving unsolicited shows of nudity. Essentially all is well in the Unwashed world.

*Names have been changed to protect the identities of those who chose not to throw society’s shackles to the wind and eat me alive on the cross country ski trail for energy giving sustenance.

I’m writing to you from my probable death bed. This past weekend, I made the decision to try cross country skiing despite the fact that it was rumored to be the only activity more vigorous than running.

The day started off reasonably well; I questioned the girl renting Natalie* and myself the skis about her experiences.

The Great Unwashed “Has anyone ever laid down in front of your desk and perished from exhaustion after cross country skiing?”

Strapping on our skis Natalie and I began the trail. We were quickly passed by a gentleman four decades our senior. We had only just begun the trail and already a part of me (my ego) was sore.

Then a little later on I saw this. 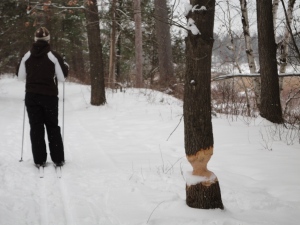 I paused and added more quietly “Was here.”

This led to a full minute of Natalie turning this way and that shouting “Where?! Where’s the beaver? I don’t see it.”

After that Natalie suggested that we rest for a moment. Although I no longer run marathons there’s a part of me which thinks “I can still move so I should”. When we stopped, I realized how sore my muscles were becoming and how badly I had needed the break. So I was really happy we had listened to Natalie rather than my marathon running voice. Multiple times along the trail Natalie suggested we stop for a breather. These breaks are likely the reason why I’m still with you and able to pen my last words at this moment.

After resting for a handful of minutes that first time, we soldiered on. It was around then when I noticed that even my knees were sweating. Uphill, then uphill again, perplexingly we continued uphill with no downhill in sight for many miles. Possibly eighteen. Two of my layers were soaked through with perspiration and a wet patch was becoming visible on the back of my jacket. Then we went downhill but only briefly.

At last, the end of the trail and the chalet came into view. Though Natalie and I were both exhausted beyond comprehension, we raced towards it. At the end of the trail, without speaking to one another, both of us removed our equipment and lay down face up in the snow. I felt my pulse in my face while my heart thudded almost violently in my chest, as I waited for the oft spoken of bright light to flood my vision. Once I realized I wasn’t imminently going to expire, I sat up, keenly aware of the squishing sounds that my wet clothing was making and my desire for water.

Then the horrible endurance athlete part of me spoke “Shall we do the trail again?” I asked Natalie. “I don’t want to at this moment” she replied. “Never under estimate the restorative powers of lunch” the marathon running, work horse voice in me added. Having decided that she too was not going to move towards the white light, Natalie sat up “Let’s go have lunch”.

The light reflecting off the snow filled our vision to begin with. Really it would have been only a short hop to blinding white light.

For whatever reason, the evil marathon running voice that which had repeated “You aren’t dead yet – Keep moving!” all morning prevailed and Natalie and I skied the trail once more after lunch.

We spent the car ride home taking turns shaking each other out of unconsciousness. That evening I managed to stay up to the late hour of six o’clock, at which point I collapsed face down on the dining room carpet while en route to brush my teeth. Upon opening my eyes the next morning I thought “I don’t know if I can walk to the library” after sitting up I thought “I don’t know if I’m going to the library.”

Gradually over the course of the day my muscles have tightened and it’s becoming clear that this is the end. As you all are my faithful followers, I thought it best to leave you a note. My dear Unwashed public, let my demise be a lesson to you; when faced with the societal pressure to combat obesity and try a new activity, stay right where you are. Don’t move a muscle or you may end up like me, slowly stiffening into nothingness.

*Names have been changed even though the unnamed are likely near the end as well.