I lived with a CFL footballer. Not like lived with as in passing him in the kitchen on my way to the bathroom in the middle of the night being all “Hey Craig, having your 2 AM egg smoothie? Nice. Well I have to pee”, but more like lived with in the same heritage home that had been divided into apartments. Although the egg smoothie bit is totally true, his wife wrote about it on her blog. Apparently footballers get up in the middle of the night and down a glass of a dozen raw eggs. I found this deeply upsetting because

Even though Craig and I were in separate apartments, it still totally counts. I lived with a footballer, that makes me 3,000% more sporty than before. Really ask me about anything athletic- I’ll know the answer as long as it’s “What colour is a football?” and “Why are there names on the back of jerseys?”

Also, I saw Craig a lot. Mostly when he would walk past my son and I while we were playing on the lawn, with me completely entombed in my sun protective gear looking like I was on my way to rob a bank that had a rule requiring people wear large hats. Craig, for his part would wave, say “Hello” and act normal, like he always lived with women vampires. I would then wave back while holding a Bubble Guppy and possibly pull down my buff so my voice wasn’t muffled to ask how he was. Regardless, Craig the footballer was super nice which was not what I was expecting.

For starters, he’s the size of a house. I’m fairly certain that once I heard him get stuck in the doorway when he forgot to turn sideways to exit his apartment. No doubt his poor wife had to call the nice European couple next door to help pull him out. 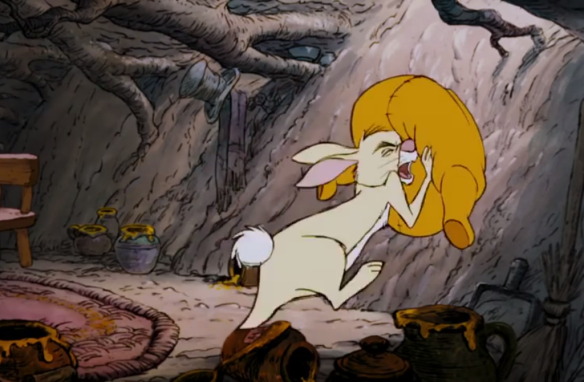 In my mind it was exactly like this but instead of a cuddly bear, it was a giant, muscly footballer. Also his wife is significantly more comely than rabbit. Photo Credit : deviantart.com

This hunch was confirmed when Craig showed me the tennis ball that he had hung from the ceiling to remind himself to duck before entering the bathroom because he bumped his head on the doorframe so often. Heritage homes were not designed with men the size of houses in mind.

Between his physique and career choice, I half expected him to be constantly pulling the legs off of creatures as a demonstration of his strength because he LOOKED like a man that could do that. Like some Gaston come to life, who would, in addition to eating five dozen eggs, would remove the limbs of eight dozen crabs and fry them up as a snack.

Given that Craig is a celebrity who appears on national television, I also expected him to be aloof; instead, when I asked him if he would sign a ball, he offered to take it in for the whole team to sign it! I NEVER would have thought to ask for this. For starters, I thought that kind of thing only happened to people with either a terminal illness or a lot of money. While my vampire-ism is unsightly, it’s not deadly, and being a stay at home mom is not the highest paying job I’ve held.

As it was, I had already purchased a ball. A basketball, because my Dad thinks I’m funny, and likes my jokes. And while all of the Blue Bombers’ signatures would have been neat, I didn’t live with all of them. And only Craig attempted to high-five my son. So his signature seemed far cooler to me.

Hence why Craig very kindly inscribed his name and number on a basketball for me, along with the message “I hope your grandsons know more about football than your daughter.” 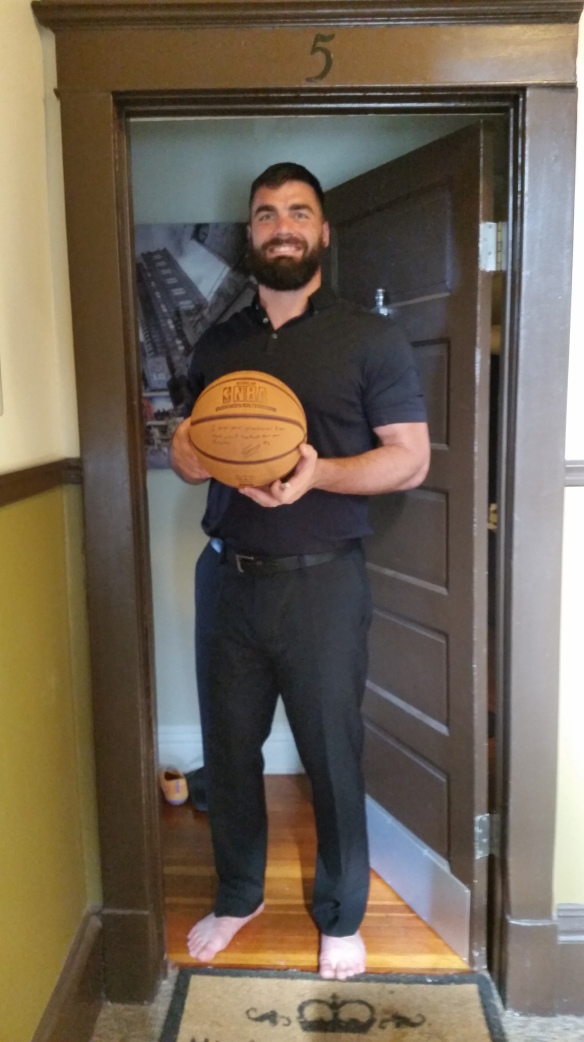 This may possibly be the only photo of Craig on the internet holding a basketball. Also, he forgot to angle himself in the doorway, so when he flexed his biceps after the picture was taken, he became lodged in the doorway again. It took a crow bar and a container of bacon grease to get him out.

Also please note how humble this man is, the message is written in tiny letters, as if he expected me to take it to all the other celebrity athletes I know to have them sign too. Happy belated Father’s day Dad, this may also be your birthday gift because I’m desperately disorganized.