One summer when I was twenty, I decided to take ballet. This would have worked better if my job as a lifeguard hadn’t ended at eight pm every evening. As it was, my criterion for classes was as follows: at my level, which began after eight thirty and that were in my price range. Hence how I ended up dancing next to eight year olds on Tuesdays and Thursdays.

The teacher was a cantankerous former ballerina who had taken to eating a family-size box of cookies each day. A large woman, she spent every class sitting in a chair shouting directions at the four children and me while an accompanist played classical music on a piano in the corner. Despite never demonstrating the proper technique once, she held the group to the highest standards and would fling objects and curse words whenever we failed to meet expectations. My lack of experience and exhaustion from working in the sun all day made me a target. My friends would sometimes tag along and listen to the lesson from the waiting room “Who was she so angry at?” I was asked after one particularly furious evening. I slunk down in the chair while changing out of my ballet shoes, “me” I answered despondently.

The teacher also owned a terrier. For the majority of the class, the dog would sleep on a pillow at the front next to her chair, but once or twice it would get up, pee in the corner, then bite the feet and legs of the nearest dancer before settling back down to rest. Consequently, the back of the room was a coveted spot not only because it was out of the range of staplers, hairbrushes and cassette tapes, all of which were occasionally thrown our way after a misstep but also for its distance from sharp doggy teeth. 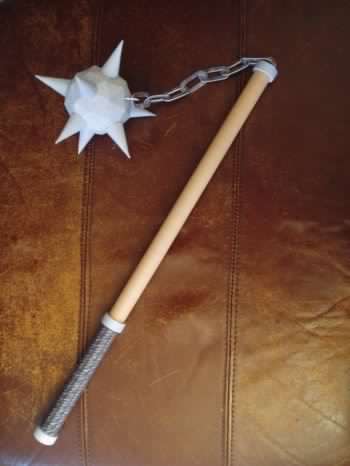 This ballet instructor likely would have deemed this to be an acceptable teaching instrument were it not for the effort required in throwing it about. (Photo Credit : walyou.com)

As I was often running late, despite being taller than the other girls and thus blocking the teacher’s view of them, most nights I stood near the canine terror.

Despite the profanities, the bite holes in my tights and the odd flying hairbrush, I continued with the class. At the end of the term was a recital. Classes became more intense as rehearsals loomed. My inability to simultaneously coordinate my arm and leg movements infuriated the instructor whom my family nicknamed “The Cube” because she was as wide as she was tall. Although my eight year old colleagues did their best to help, hissing the dance names under their breath at me -“jeté!”  in the hopes of avoiding the instructor’s wrath, it was to no avail. Finally one night, after watching me flail my arms and barrel sideways into the smallest dancer “The Cube” declared that we were all to hold hands and dance. This had the added benefit of allowing the children to whisper the sequence of steps to me without detection. Class went smoother after that.

This experience culminated with the recital. Picture fifty eight-year-olds in leotards and slicked back hair and twenty-year-old me running around the underbelly of a theatre while upstairs, onstage other eight-year-olds in leotards with slick backed hair performed.  It was the pinnacle of my dancing career, and I absolutely wasn’t ready. My family had turned out in full force complete with flowers to congratulate me afterwards. My sister had even brought along her boyfriend. While the children ran up and down the halls, muffling their shrieks of joy with their hands, I obsessively practiced the choreography. Then, my turn came; nervously I lined up with five tiny ballerinas, looking like a female Billy Madison  and stepped onstage. 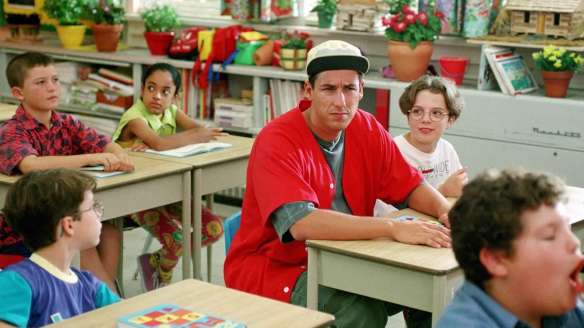 It was like this, but with a tutu. Also to make matters worse, because I was a nightmare of a dancer, “The Cube” stuck me not in the middle, which would have made the height and age difference less obvious but towards one of the ends so I was buffeted by two little girls who knew the routine much better than me. (Photo Credit : downtowntulsaok.com)

Halfway through the dance I realized I was grimacing, so I decided to smile. That slight break in my concentration caused me to lose the beat and lightly trample the child’s foot beside me. In the wings, my family said “Oh! She smiled! And now it’s gone.” Once more, I focused on the steps determined to keep up with my tiny dancing cohorts. After, we bowed and exited the stage and I awkwardly congratulated the little people on their work, while they stood, still not quite certain what I was doing there. Ballet is without a doubt a commitment involving pain and sacrifice, but for me it was mostly an exercise in all aspects of discomfort, right down to the weird slick backed hair.

This post is dedicated to Tex. I can’t wait to celebrate our first anniversary with you tomorrow.