Where I live during the day or when my roommate is home. (Photo Credit: hpo.bc.ca)

It was like the climax of any good horror movie; a young woman sitting at home alone in the dark, talking on the phone, unaware of the impending danger.

There I was, happily ensconced in my favourite enormous chair when I first heard the sound. The scratching was so soft that I could almost brush it off. I continued my phone conversation determined to not give in to my ever present fear that a burglar/ninja/bad guy will break into my house.

But then the scratching grew more insistent. My responses on the phone became distracted as I began to listen intently to locate the source.

It was coming from my closet. Now the scratching became persistent, it was as though whatever was in there was trying to get out. Filled with the kind of courage and determination that makes characters in films search the supposedly empty basement unarmed and in a bikini, I strode toward my closet (fully clothed) and slid open one of the two doors to- nothing. The scratching stopped and I convinced myself that even though there were no trees close to my house, that the sound had merely been a branch brushing against a window.

Focusing on the phone conversation once again, I sat back down in my easy chair. Then just like in the films shown every Friday the 13th, the noise started again, softly to start, then increasing in volume. And though the other side of the closet was packed to the gills so nothing could fit, I understood that I had to look.

“I’m sorry” I said to my friend over the phone. “There’s this noise and I have to check it out”. Having someone on the other end of the line comforted me, although everyone knows that in a good horror film, the friend, upon hearing screams through the phone before it goes dead, never calls the police instead they come to the house to be murdered too.

With trepidation, I crept towards the closet, constant scratching made my heart beat loudly in my throat. Once more I slid open the closet door to nothing. Relieved, I exhaled, but my respite was short lived because I heard the noise again, louder this time, now that the closet door no longer muffled the sound. It was then that I knew I would have to look in the giant box in my closet. Carefully pulling back the flaps, there two eyes peered out at me from the darkness. I screamed bloody murder into the phone and took two leaps backwards from the closet in terror before I realized that it was Whiskey, Meredith’s* cat.

What I thought was in my closet. (Photo Credit: hotteahotbooks.wordpress.com) 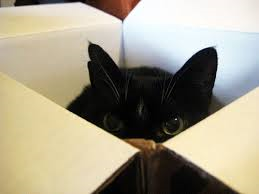 What was actually in my closet. (Photo Credit: flickr.com)

*Names have been changed to protect the identities of people who may have hired their pets to assassinate me using fear as their weapon.