Much to my great pleasure and surprise, life stopped beating the snot out of me. Regrettably, life is still life which means it’s continuously handing me lemons, but at a more manageable rate thankfully, so I’m able to turn to those around me and say “Who wants dessert? Lemon meringue anyone?”

Which is my way of telling you, my fair readers, that I made everyone pie. Actually that isn’t true; I am neither that skilled nor that motivated. However I thought about making pie, in my world that’s practically the equivalent of the act itself. Often in my life I’ll think of jobs and assume because I’ve thought of them, that I’ve completed the tasks. Hence why I’m writing this post in the dark, let that be the lesson of the day; pay the electricity company, they have no sense of humour and a complete lack of regard for the fact that their customers contemplated paying the hydro bill multiple times.

I digress, for those of you who have been steered this way from North of the Grid, I apologize, not only is this not a science blog packed with useful information but we’re out of pie. My condolences, however the invitation did say come early. What you have stumbled upon is a humour blog that contains record of all of the nonsensical things I do to myself and loved ones.

And on that note, allow me to share my most recent paddleboarding experience. Last Saturday, having learned my naked, cold lesson the previous week, I arrived at the dock fully kitted out and ready to sit Maddie on a paddleboard for a couple hours with me. 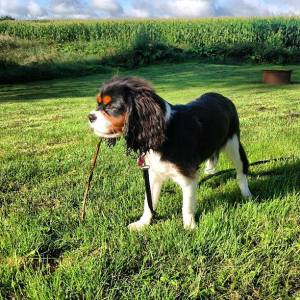 This is Maddie. Her hobbies include chasing squirrels, trailing bits of sticks into the house and staring woefully at me while I paddleboard. Photo Credit : northofthegrid.com

“Hello” I said waving cheerily to the blonde, tanned youths working at the dock, “I’m the naked gongshow from last week. I’ve come to give a repeat performance.” At which point the youths all shaded their eyes, ostensibly to protect them from the sun but more likely because the young workers had no desire to see my doughy midsection again.

The young man, who I can only assume drew the short straw, held the paddleboard for me while I took out a bathmat and proceeded to press the suction cups to the nose of the watercraft. “This is so the dog will have something to grip” I explained while the silicon mat made “sqwoosh, shlup” sounds on the fibreglass board. Then I secured the dry bag, stuffed to the brim with a towel, sunscreen and a doggy snuggie to the back of the paddleboard. 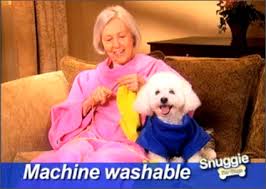 Even canines like to get warm and fuzzy after they fall in the river. Photo Credit: community.babycenter.com

Next of course came Maddie herself, who was looking bulky and resplendent in her lifejacket. That is, as long as resplendent means awkward and funny-looking. Then of course I had to remove her lead and secure it to the back of the board with the dry bag. It was at that moment, kneeling on the board with a dog on a bathmat on the nose and what was in essence a giant doggie diaper bag on the other end, that I realized that I had failed to grab a paddle. “Help!” I cried to the youth who had long since given up feigning interest in my floating sideshow and let go of the paddleboard, “I need a paddle!”

At first, I was handed a  broken paddle which was missing a section “This won’t do” I told the youth gesturing towards Maddie’s small shape on the front of my board “Do you not see all the extra weight I have to propel forward? I need a whole paddle.”

Eventually an unbroken paddle was found and away we went. The Provincial Park staff has since begun campaigning for a raise, supposedly to compensate for all the nut jobs they are forced to assist.