It’s possible to love someone to the ends of the earth but to also realize that you could never work with them. Sula spends three months of the year living in the Arctic without running water, electricity, and heat. In my heart, I knew that not only am I neither tough enough, nor brave enough to do this, but that I possess nowhere near the amount of common sense to make a field season happen. I proved this fact repeatedly the last time Sula came to visit and we hiked into the back country to camp.

After returning from the Arctic, not only did Sula have the best pack, she was also the heartiest, having carried guns, science equipment and everything needed to survive on her back all day, every day for the previous three months, thus she was given the heaviest load. (Did I mention she returned with a six pack? And not the alcoholic kind.) By contrast, at almost five months pregnant and carrying a pack that Tex bought for five dollars that proceeded to fall apart over our eight kilometer hike in and out of the back country, I was given the smallest load. Also Maddie, who functioned as a kind of a doggie tow rope for my exhausted self.

Everything was going fine, we arrived at the camp and Sula was tasked with setting up the tent. Given that she can set up equipment that she’s never seen in complete darkness, in the middle of a howling blizzard with no instructions and both eyes closed, it was a cinch. 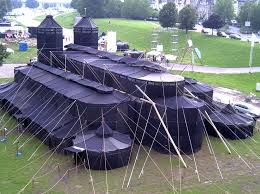 This would take Sula all of ten minutes, And thats with a coffee break. (Photo Credit : pinterest.com)

I was asked to get water, an errand normally completed by Tex when he and I camp together.

Even though it was summer, Tex and I live in the very, very, very far North, which is to say that there are approximately two days a year when one would want to swim outside, and both of those days occur in July. Sula and I went camping at the end of August so the water was exceptionally cold. Prior to filling the collapsible camping bucket, I removed my shoes and waded out, my knee may have bumped an iceberg or two in the process and I shrieked in pain and surprise.

Always the leader, in hearing the most vulnerable member of her crew scream, Sula ran from the tent, down to the beach to make sure I was ok. “I’m fine” I called to her, “Just getting water. See?” Emerging from the chilly lake, I proudly showed Sula the fruits of my labour- a bucket of water so murky with sand and “seaweed bitties” that one would never be able to drink it. If I’m being honest, there may have been a small fish or two in my gathered water as well. Sula nicely explained that it wasn’t potable even if we did strain the bucket, that would leave approximately two teaspoons of clean water.

What do you mean we can’t drink the beach? (Photo Credit tcpermaculture.blogspot.com)

She then pointed to a more appropriate location to gather clean seaweed and crayfish free water.

Aside from spilling the first bucket of clean, “bitty-free” water I gathered on the beach, things started looking up from there. That is until I set my socks on fire twenty minutes later. Thankfully they weren’t on my feet at the time, they were only drying next to the fire. The night continued to go downhill when I revealed that Sula had packed in two litres of milk and a giant container of potato salad for dinner. Jokes were made about how I will be made to carry a lasagna in a Pyrex dish into the back country when Sula is pregnant.

Between my dismal packing abilities, dramatic over reactions to water and partial lack of common sense, as we were hiking slowly back to civilization I turned to Sula and asked “I could never come to the Arctic with you, could I?”

“You could,” Sula answered kindly, “I’d just have to send you back in the twin otter airplane before you ever touched the tundra.”

The neat part about close friends is that even if you can’t ever work with them, you can still have all kinds of fun.