So I’m a circus. It’s probably due to the big curly clown hair, but it seems regardless of where I go, it’s a performance. Three months ago, we acquired one of these. 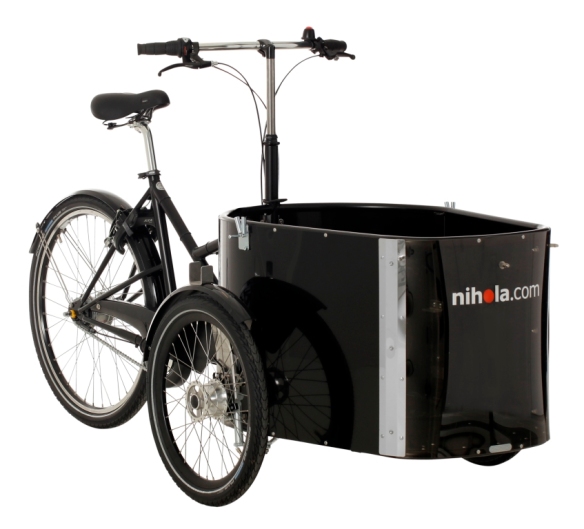 Jealous? I know I was when I first saw a mom riding her two little kids in a cargo trike. Photo Credit : Nihola.com

Since that fabulous day three months ago, when a truck dropped our new bike on our doorstep,  we’ve put 800 kilometers on it. About 500 miles for my US friends. This bike is amazing, we take it grocery shopping, for short haul trips, transport Mini-Tex in it everywhere. He loves it, we love it, and based on the amount of people screaming out their car windows “Neat bike!”, our fellow townspeople love it too.

Children especially love our bike, because, and I say this from experience, at times it’s kind of like riding on a tiny trackless roller coaster. I’m not ashamed to say I beg my husband to bike me to our date night locations. It’s tremendous fun and I feel like the queen waving at my public as we ride by while everyone stares.

Knowing all of this, when we packed up to visit Aunty Betty, Carter, his mom and his little sister at the beach. I pleaded with Tex to load our trike into the van. And because Tex is a nice guy, he did, even though it’s totally a pain because while sturdy, useful and a perfect vehicle for us, our Nihola Family trike is neither light nor easy to maneuver into a van. It’s only through a combination of Tex’s farm boy know-how and his engineering smarts that it manages to fit.

Flash forward to us arriving at my Aunt’s cottage at the beach. The kids immediately high tailed it to meet us and shrieked with joy and excitement, seeing the bike. I should add a disclaimer here. While we easily transport our son and two weeks of groceries home in our Nihola trike, it’s only meant to carry 220 lbs or 100 kgs in the front. And while a person can absolutely put that amount of weight in the front, oh boy is the rider ever going to feel it the next day. Plan to take the elevator if you’re ferrying around the maximum weight because in addition to the cargo, the bike itself weighs 70 lbs. On top of the mass of the actual rider because I’m assuming the seat is too high for most woodland fairies and forest eleves. Also those magical, weightless creatures are notorious for clinging to union rules and taking extended coffee breaks so they don’t make good cyclists to begin with.

So we strap in Mini-Tex, then we strap in Carter’s sister CiCi, and finally eight year old Carter crouches in the front. A combined weight of 300 ish pounds all told. Did I mention that this is a road bike? Meaning it’s meant for paved flat surfaces. Being an engineer, Tex already tricked out the gearing system so it’s easier to pedal on grass but gravel and large hills still pose a challenge.

With this in mind, I steered the bike and the children down a hill first. This would have gone better if I’d understood the braking system but things like common sense and asking Tex for explanations aren’t my forte. As it was, I yelled for CiCi and Carter to “Lean right!” as we careened around a corner at top speed. While trikes are tremendously stable for road biking, if a person takes a corner at a high enough speed, it is possible to flip the Nihola trike. Which is why it’s helpful if the riders and passengers shift their weight while turning. I swung my weight over the side as the kids leaned right and the wheels miraculously stayed on the ground.

We went over rocks, Carter went bump, bump, bump in the hold of the trike. CiCi and Mini-Tex had the best seats in the house with a cushion under their tiny bums. I spotted a pot hole a second too late, the front wheels avoided it, but the back wheel hit it smack in the middle. I clung to the handlebars as my butt bounced a foot in the air. As my tailbone came crashing down on the seat, I silently thankedmy huasband for choosing the most padded of bikes seats.

We pedalled  over grass and rocks. We enraged a neighbour’s dog who had never seen anything like our bike. The local cottage owners stared slack jawed as we whizzed by while their children looked on enviously. I rode and rode, searching for a relatively flat route back to my Aunt’s cottage. It seemed like every road was a mountain. My thighs burned from the exertion of transporting three children.

After about my third lap of the entire community, I spotted it; the only gentle hill which led to my Aunt’s cottage. The only problem was, it wasn’t paved. “Lean forward” I called to my young passengers as I approached the incline, pedalling at top speed. Carter and CiCi obediently hunched forward. I pedalled hard. I could hear my heartbeat in my ears. The bike slowed to a crawl. A snail and two caterpillars passed us. I kept pedalling. My breath was a wheeze. “We might go backwards” I warned just as the tire slipped on the gravel. “Ahhh!” I yelled in frustration. “EEEEEE” CiCi and Carter yelled in fear. Mini-Tex was still trying to figure out why he was having to share his ride, so he was unperturbed. A man came out to his porch to see the commotion.

Once again, I tried to pedal. “Lean forward!” I commanded the children. Carter and CiCi were all but hanging over the front end of the trike but the tries were still spinning out on the gravel. Exhausted from the effort, I stopped pedalling and the bike lurched backwards again. CiCi’s little hands white knuckled the side of the frame. The man who was watching started to sprint towards us, “I’ll give you a push” he cried.

Just then, I spotted it. Although it was gravel now, at one point, the road had been paved, and just to the left of my back wheel, I spotted a two inch strip of pavement. I let go of the pedals and the bike rolled backwards again, then I gathered every ounce of energy left in my exhausted quads and pedalled furiously. The tires caught purchase of the pavement and the bike moved forward. Slowly, we made our way up the hill again just as the friendly passerby arrived panting at our side. In the distance, I saw the snail heckling us to the two caterpillars.

The helpful man waved to us as we made our way past. A group at the top of the hill clapped. When I looked sideways, I realized the there were people standing in the windows of the nearby cottages staring. I’m not sure whether this is better or worse than eating fire. Definitely an improvement on lion taming though- I’m a dog person. I’ve  accepted my perpetual spectacle status.