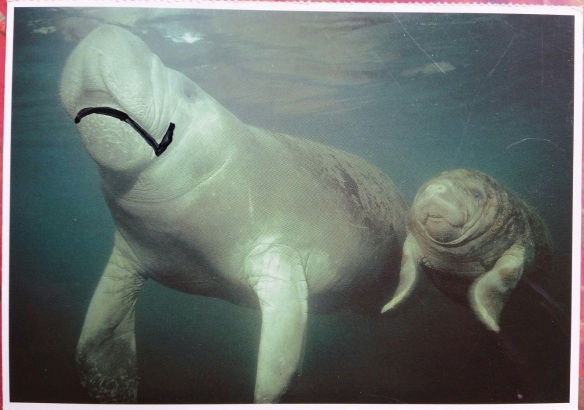 Wyatt the manatee thinks that his chin strap is both edgy and classic. Tragically, his friends don’t have the heart to tell him that any facial hair doesn’t work on endangered floating mammals and that as much as Wyatt would like it to, the chin strap doesn’t mask his recent weight gain. Instead his girlfriend just keeps suggesting that they go for swims together. Oh manatees, it could be worse, it could be a soul patch.

I’ve sent out so many postcards, I don’t actually remember who I sent this next one to. Or it’s possible that it’s hiding under the couch unsent. When one sends out over two hundred pieces of mail annually, this sort of event happens where six months to a year later, you find the lost piece of correspondence all sealed up and stamped. And part of you is like ‘We should just send it- no matter that it’s August and this is clearly a Christmas card” and the other part needs to open it up first to see what sort of madness is inside because when one writes a hundred thousand words a year, some of them come out squirrelly, and you don’t always remember what you’ve written. 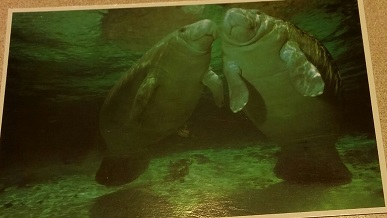 You’d never know it but these two manatees are at a dance. It was a poorly attended event what with the fact that manatees are notorious for being shut-ins. The two lads pictured here are secretly thinking that their parents’ watery basement would be more comfortable although they’re daring one another to swim up and around the girl manatee with algae on her tail. Oh awkward manatees, I wish I could tell them that things get better after high school, but they won’t, these two will always be manatees.

To Birdie*, (sent a couple weeks after the first postcard)

Oh no. He’s gone and done it. Wyatt decided to up the ante. He grew a soul patch. His friends had just gathered the courage to tell him that his chin strap was ridiculous and now he’s gone and grown a miniature soup strainer. Which, considering that the whole ocean is effectively soup, means that Wyatt perpetually has something in his facial hair. What are Wyatt’s friends to do? A chinstrap is one thing, but a soul patch? His girlfriend broke up with him because she thought he was a sloppy eater, always swimming about with bits of algae stuck on his face. Poor Wyatt, if only he had known to shave.

Let’s be part of the solution friends.

*I’m not sure what this poor woman did in her previous life to deserve this many ridiculous postcards of manatees with goatees but I can tell you that she’s repenting now. The least I can do is change her name on my website.