Welcome my Unwashed Public, to another indistinguishable Monday; here we have an image taken while I was on vacation. I’m not entirely sure what this object is but clearly it wasn’t that important because I cut off the top. Sometimes while wandering around museums with my family I would take pictures of pieces that the guides would point to even if I hadn’t heard what it was. Otherwise I would have come home with a bunch of images that I thought were important like four pictures of a man’s moustache or a photos of part of someone’s hand. Mind you I came home with those same photos anyway but that wasn’t intentional. 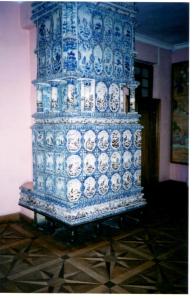 My guess is this was taken in Europe. Or possibly on the Titanic. A place with old things at any rate. Europe is probably the better guess because I’ve never been on the Titanic. Although apparently that boat had grand staircases so it’s entirely possible that it had ornate vase-oven-mausoleums aboard to keep the flowered dead baked goods fresh too.