I did my friend Sula’s* house a disservice in my last Crackhouse Chronicles post. Though her home is located in an area where when I pass a group of youths I silently thank them in my head for not robbing me, Sula’s home is actually quite nice. First and foremost it has Maddie, her Cavalier King Charles Spaniel. Sula’s puppy is adorable and well trained. 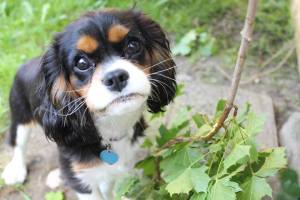 Hobbies: Melting the hearts of people everywhere and providing little to no protection from street urchins. (Photo Credit: Shamelessly stolen without Sula’s permission from Facebook.)

Also my friend who crouches in the woods at night with bears is the best host I know of. Before I arrived to house and dog sit, Sula had shampooed the carpet in front of her fireplace for me because it’s my favourite spot in the house.

The other rooms were also immaculate when I arrived. Unfortunately not so much anymore. With each passing day I’m beginning to feel more like John Candy in “Uncle Buck”; completely out of my element, surrounded by bizarre items that I have no idea how to work like the UV light that hangs above her tomato plants which turns off and on at random times throughout the day.

The first night alone was nearly fatal. Before she left, my friend taught me how to use her mattress warmer. I wasn’t aware such things existed. Living in the doctor’s house which was built in 1915, at a time when steel wool passed for insulation, I had assumed nights were times when one bundled up in eight different quilts, threw on a toque and mittens then hoped that the news about global warming was true.

Not only was Sula’s house built after the end of the First World War, I’d wager it never even saw the second. As such it was quite warm already the first evening that I was there. However fearing the chilly bedroom that my friend who crouches in bushes described, I jacked the mattress warmer up to “High” while brushing my teeth then turned it down to the lowest setting before hopping into bed.

Perhaps Sula didn’t like her Christmas gift last year, or maybe at one of our many craft nights I left a mess, or possibly that pretty smiling exterior is a mask for a trained and determined killer. Whatever the reason, I can only assume that after eating venison Sula decided the next best thing was Unwashed Flambé. At midnight I woke up in a pool of my own sweat the mattress warmer on its way to roasting me alive. The tiny spaniel next to me was paddling around on the soaked bed trying to keep her head above the salty water.

Nearly delirious with fluid loss and electrolyte deficiency, I stumbled downstairs for a glass of water and a towel to dry off the puppy that stood bedraggled and bewildered on what was now a water bed.

The puppy looked like this. Only sopping wet and doggy paddling for her life. (Photo Credit : Once again taken without permission or regard for the world’s impending desire to usurp my position as dog sitter after seeing the photos.)

The next night I unplugged the mattress warmer fearing that like many of the other appliances in the house, it may be on a timer.

*Names have been changed to protect the identities of the innocent. Or possibly me, it’s doubtful whether Sula can still be considered innocent after I spent two days re-hydrating.