It’s the first day of the work week. This can mean only one thing; time for more of my bad photography! 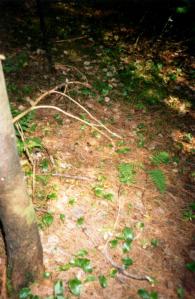 In the album the caption below this picture says “A bird!”

I have yet to find said creature. It’s my guess that I stumbled haphazardly into the woods and pointed my camera at the ground thinking that ten to one there had to be some sort of wildlife there.

At least I didn’t label it “Iguana!” That would really be a head scratcher because this was taken in Algonquin Park.

I began the day by sorting through all of the pictures I’ve ever taken so that my readers will know my starting point. In the process I managed to find some paperwork that I had cleverly hidden in a place I would never think to look, nowhere near where I store important documents.

It’s almost Tuesday so I’ve decided to make this a two-for-one post and throw in some Travesty Tuesday correspondence. The following is the actual email I sent to my mortgage broker, who is thankfully also my Aunt so she had at least some idea of how difficult it would be to work with me.

Guess what I found while looking for pictures to put up for “Indistinguishable Mondays”?

My Notice of Assessment. Score one for completely inefficient and disorganized filing systems.
Yay.
I will send it on later today when I’m not sorting through photos going “Whose naked back is that?’
and “Why do I have so many photos of naked backs?”
I am a very responsible adult. You should probably send your daughter to visit me during her February break, I shall teach her important grown up things like how to take months to file paperwork.
Much love and apparently many skin photos,
The Great Unwashed
In a show of poise and unshakable professionalism Aunty Camelia* sent me back a sincere and concise thank you.
*Names have been changed to protect the identities of those people who are helpful and patient, even if said person did once try and feed me puffed bulgur.