My friend who crouches in the woods at night with bears is moving. She’s also been known to go by the name Sula* however sometimes when your friends do outlandish things they must be described by their actions.

Sula is moving to the Arctic, to crouch on the tundra with polar bears. Apparently it’s a highly coveted position; being a light appetizer to one of the most monstrous and terrifying mammals in the world. Although as Sula puts it “I’d rather not be eaten alive by a polar bear in the name of science” so technically that isn’t the actual purpose of her job, more of a side project. 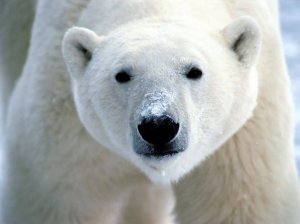 What is the opposite of barbeque sauce? Sula needs to coat herself in that. (Photo credit : myblueprint.ca)

I’m going to miss her terribly. As a dear friend of mine she’s been known to feed me on a weekly basis and allow me to bask in the glory of her fireplace. Her Cavalier King Charles spaniel and I enjoy lying face up pointing our bellies towards the flames in a most undignified manner. It’s great fun.

I’m feeling quite bereft, I haven’t the remotest clue how I will fill my Thursday nights which previously had been Sula and my time to meet up and work on our various crafting projects. That’s a lie, Sula would work on one of her many exquisite quilts and I would paint a shirt for twenty five minutes and then collapse on her floor groaning about how much I hate painting in between lying on my back in front of her fireplace.

As with any dear friend I will miss her endlessly. However she’s going to a better place. A place where people will appreciate both her ability to fire a semi automatic gun and apply false eyelashes so carefully that you wouldn’t believe the spidery tendrils weren’t her own. These skills will come in handy as Sula is heading to a city filled to the brim with environmentally minded hunters and lesbians. With her luscious brown hair and ability to discuss the effects of climate change on shore birds I have no doubt her dance card will fill up quickly.

Although Sula is moving in May I’ve decided to hold “New Unwashed Friend” auditions starting next month. All candidates must possess the following qualities.

Auditions shall be held on the third Thursday of next month.

*Names have been changed to protect the identities of persons who make me delicious salads.