Every year Canada Post runs an incredible program that is manned and operated by volunteers. In the months leading up to Christmas children can send their letters to the North Pole and Santa will write back. Of course “Santa” is probably a fifty seven year old retired female accountant but it doesn’t matter. The whole thing is magical.

Occasionally I like to spice up my sister’s life by sending her ridiculous things in the mail. Sometimes it’s a drawing. 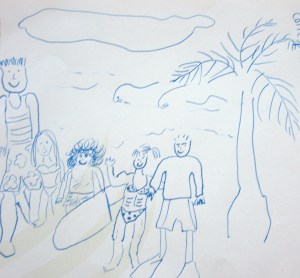 This hangs on the fridge next to a mosaic made by our five year old cousin. Those are my mother’s abs by the way, not an homage to snakes on her stomach. I’m in the middle.

Sometimes it’s an awkward valentine professing my love for her roommate. Recently, I’ve felt the need to step it up a notch. So I decided to write to Santa on her behalf. We’ll see whether Santa writes back.

Lookin’ hot. I’m loving the black belt that you wear. So trendy.  Last year you were awesome by the way. I loved how all of the clothes you brought me also fit my sister which was fabulous because when I gave them to her, she found them very wearable.

For this year I would like clothes again however as always I’m a little picky. I would like a very specific garment- a bee keeper hat. Just the hat. Not the outfit, and preferably in beige. Living in the downtown of a metropolis can get kind of boring so I’d like to spice things up by plopping the bee keeper mask and hat on my head and then wandering through the streets pretending I’m in the middle of a post apocalypse movie. Also if you could bring me a guy who looks like Will Smith to help me out with the whole charade I’d appreciate it too. Don’t get too stressed about bringing me the actual Will Smith, I know you’ve got a budget. I’d also like whoever you bring me to be able to juggle. There is never enough juggling in post apocalyptic alien war movies.

I should probably add that Diana and Phillip are very happy together and to my knowledge Diana has never expressed an interest in Will Smith or Will Smith lookalikes. I merely was drawing from my meager well of post apocalyptic movies which consists of “Men in Black”. Also I once saw a poster for “I Am legend”. Generally I don’t watch movies because that would requires for sitting for a period greater than ten minutes.

*Names of Diana’s boyfriend’s have been changed to protect their anonymity because they never asked to be a part of a family with a weirdo writer.