So supposedly this Sunday I’m attending Candy Hooling’s* eighteenth birthday party, which means that my cousin with the stripper nom de plume will be the age of majority. Well not really, but here in Canada we let you gamble with both your money and your life at eighteen. She’ll be able to buy lottery tickets and enroll in the military without her parents’ permission. Sweet deal huh?

Anyway to mark this blessed event, I decided to put up a selection of the photos that Candy took and then altered of me when she visited during her March Break.

Please note these photos are not the only ones that Candy has worked on for The Great Unwashed, she also photoshopped the photos for Noctural Apparitions. However I’m not putting those pictures up because frankly she didn’t do a very good job. Not only did Candy fail to make me look thinner, I also bear no resemblance to Charlize Theron in the doctored photos. These were my requests when I sent them to her. She made some very poor excuse about Photoshop being designed to alter the light not your facial structure.

Anyway, without further ado, the photos Candy took as well as the stories that go along with them.

This is a photo of me looking pensive. Candy must have photoshopped the light in this picture a lot because I never appear reflective. For the record I’m staring out into a flooded park. This is where I take my guests, to areas where hip waders are both a fashion statement and a necessity. Little wonder that Roscoe and I have so few visitors.

So Candy and I were walking along when she pointed to the bench in the photo above and said “What can you do with that bench?”

Well as you can see I can pretend to dive into it. But one can only go head first into park benches for so long. 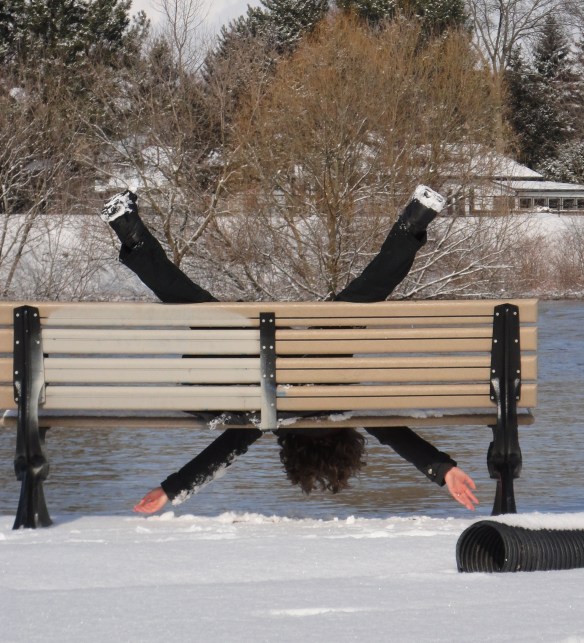 This is how short people use benches, hence why one rarely sees a small person sitting down. Furniture is not designed for people of our stature so we’re forced to find repose in unconventional poses.

This was a particularly hard shot to get, mostly due to the fact that my core strength is what is holding me up. This wouldn’t have been a problem if Candy and I weren’t laughing so hard at my silliness.

After taking this shot Candy insisted that I take a “real” author photo and framed this lovely scene below.

Please note bumbogganing is similar to tobogganing except when bumbogganing you slide on your bum, and in my case directly into an icy river. It’s the stuff that good ol’fashioned fun and hypothermia is made of. 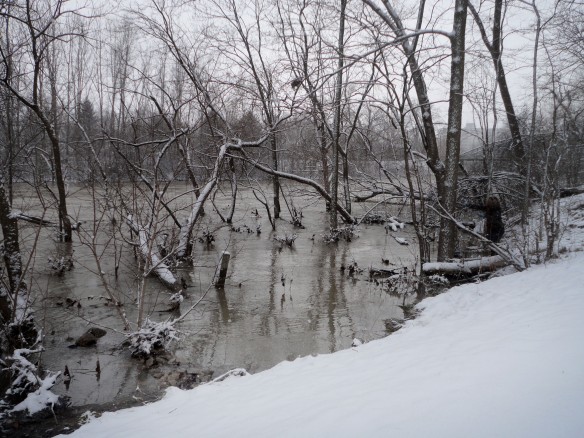 Not pictured- the moment when I let out an “EEEEEE” and slid down the log I was climbing on into the river. According to Candy it was entertaining to watch. Note I am wearing Candy’s gloves because at eighteen she has far more sense in her young head then I ever will in mine.

Whereas this photo merely looks like I’m leaping into the river. Although I am in the habit of hurling myself into disgusting, murky, silt-filled rivers when I feel the world is far too hygienic and sanitized, only to emerge a little downstream freshly filthy and ready to take on both Lysol and Lever 2000, as it was I had a youngster with me that day so high speed mud baths were not on the itinerary.

If I recall correctly Candy had to actually lie down in the snow to get this shot. Needless to say my commitment to dirt and a general lack of cleanliness inspires an intense devotion in youths.

This photo is funny on a number of levels. Not only am I small and incapable of pushing anything larger than a two year old over. But my arms also resemble pipecleaners, in both their ability to lift things without bending and in their thickness. 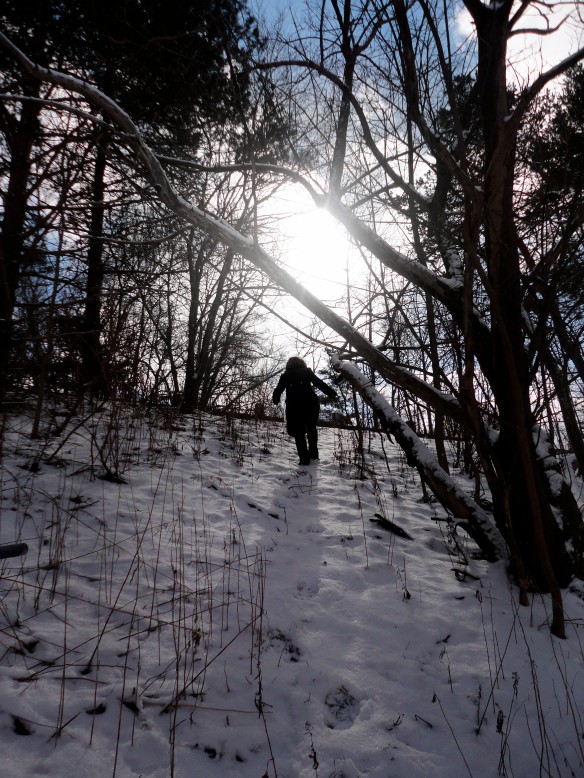 Candy is an aspiring artist, she wishes to work in television and radio.

This is one of my city’s many historic homes. Candy and I decided that this should be the new way for tourists to pose in front of the house. For some reason my city’s tourism board turned this idea down when I sent this suggestion along with the photo to them.

*Names have been changed to protect those who although are very grown up, cannot yet drink in this country. If you think you’ve got it rough here kiddo, try the States, you’d have to wait three years.

Happy Birthday and much love,